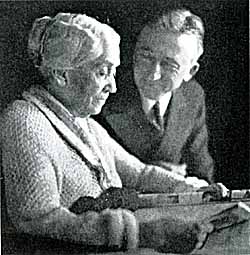 (Pop Byrnes with his mother.)

"James F. Byrnes was a symbol of all that is good and fine in America." Senator Strom Thurmond

"Not only was Governor Byrnes one of the most distinguished citizens ever to represent our State, he has also taken his place among the greatest American patriots of all time." General William C. Westmoreland, US Army Chief of Staff (Appointed to West Point by Byrnes)

"Few men in our history have had such a profound impact upon the lives of Americans and have been in a position to use their talents in as many ways to benefit our citizens. His deeds will long stand as a monument to him." J. Edgar Hoover, Director, FBI

"It is with gratitude that we remember [Mr. Byrnes'] efforts for the reconciliation between the American and the German peoples during the years from 1945 to 1947, which were fateful to us Germans. We think of him in respect and gratefulness." Walter Scheel, Federal Minister of Foreign Affairs, West Germany

"There are only a few -- a very few -- in a world of many people who can by virtue of both character and achievement be called great. Justice Byrnes was such a man. But of the few who are recognized as great, there are an even smaller number who are both great and good. Justice Byrnes was also a good man." General Lucius D. Clay

During 1979, The McKissick Museums at The University of South Carolina ran an exhibit entitled James F. Byrnes, 1879-1979, Portrait of a Statesman. Content of the exhibit brochure summarizes the life and career of "the greatest statesman to come from South Carolina in the twentieth century."